The most honored star grouping in the sky, Thuraya was often called “the Asterism/Star.” The name “thuraya” is very old. Grammatically, the word is a diminutive, and so its meaning would be akin to “the Little Abundant One”, which grammarians tend to relate to its many stars. Additionally, this meaning may refer to the abundance of rain that falls during its rain period (see below). This possibility is strengthened by the existence of very a similar sounding word that indicates moisture. The feminine diminutive form of Thuraya gives the word a sense of endearment, like the English “dearie” or “horsey”. In legend, Thuraya is anthropomorphized as a woman. 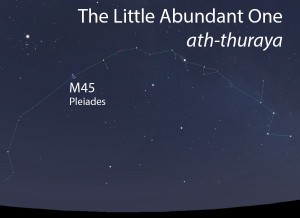 Thuraya as it appears in the west about 45 minutes before sunrise in early November. Sky simulations made with Stellarium.

A bright, close cluster of stars known in modern times as the Pleiades star cluster.

Ibn Qutayba (d. 879 CE) reported that Thuraya was said to rise on the morning of May 13 and set on the morning of November 13. On account of the precession of the equinoxes, today we can expect to observe Thuraya setting in early December and rising at the beginning of June, as seen from the latitude of Tucson. (See How to Observe on the About page for more on this topic.)

In the calendars of Qushayr and Qays, the morning setting of Thuraya occurs at the end of the autumnal rainy season called al-wasmi. This season is so named because the rains literally mark (yasim) the ground in terms of both the force with which the heavy rains hit the parched earth and the green foliage that quickly appears as a result of the rain.

In early listings of the lunar stations, Thuraya is the fifth station of the year. This was later changed to the third lunar station after the stations were adjusted to begin with the vernal equinox. The stars of the Two Signs match the Hindu nakshatra called Krittika.

No star or asterism has more pieces of rhymed prose associated with it than Thuraya. As a rising asterism, Thuraya was the first star of summer (as-sayf). It also had a mini-calendar of its own, whose rhymed prose described its positions throughout the year when observed in the evening.

Thuraya, the Abundant Darling of the Heavens
The Little Lamb that Changed the Calendar
When Thuraya Rises