the mirage runs on the stony hills

Feature image by I, Rémih CC BY-SA 3.0, via Wikimedia Commons

Today begins our second journey through ancient Arabian skies. Our first journey followed a setting star calendar of rain stars through the course of a whole year. This time, we will follow a complex of rising stars, many of which functioned as a calendar. Once again, the proper time to observe a star’s morning rising (or setting) was called ghalas in Arabic, a time when the darkness of night mixed with the white and red light of dawn in the tracts of the horizon (How to Observe). My apologies to those of you who are not early birds!

The earliest account of this calendar of rising stars was given by Qutrub (d. 821 CE), who presented listings of the stars of summer and the stars of winter. Each star was accompanied by a line of rhymed prose (saj’a in Arabic), which ends each phrase with a rhyme but lacks the formulaic internal meter of poetry. For example, look at this transliteration of some of the Arabic rhymed prose for Thuraya, which the Arabs honored as the Star (an-najm):

Following Qutrub, more stars were added to this collection of rhymed prose, but they were no longer presented as the stars of summer or winter. Instead, they became references for the calendar of lunar stations, which tended to emphasize the rising of its stars over their setting. This rhymed prose was also used in solar calendars that presented the movements of the various stars throughout the twelve months of the year.

Thuraya, a Rising Star of Summer

Thuraya (ath-thuraya) was the proper name for a brilliant and celebrated star cluster that many Arabs simply called an-najm, the Star par excellence. (You may know it as the Pleiades or M45, Messier 45.) The name Thuraya was a proper name, but its meaning would translate to the Little Abundant One, which referred either to its many stars or to the abundance of rain that its dawn setting heralded. In stark contrast to this, Qutrub’s rising star calendar presented Thuraya as the first star of summer, and its rising therefore announced the onset of great heat.

When the Star rises,
the heat is vehement,
the herbage is brittle,
and the herds of wild asses bite each other with the fronts of their mouths.Rhymed Prose 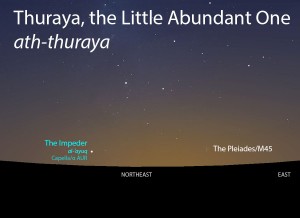 Thuraya (ath-thuraya) as it appears rising in the east about 45 minutes before sunrise in early June. Sky simulation made with Stellarium.

As I write now from the Sonoran Desert of Tucson, Arizona, Thuraya rises out of the pre-dawn twilight in early June. However, back in 9th century Arabia, Thuraya would have risen in the middle of May, due to something called the precession of the equinoxes. (Read up on this on my About page.) Even today, May is already quite hot here in Tucson, as it is in the Arabian Desert.

For the Arabs of the 9th century, the rising of Thuraya began the first of five named periods of vehement summer heat, this one being called the Intense Midday Heat of Thuraya (waghrat ath-thuraya). As the heat intensifies, the moisture in the air disappears, and the herbage dries up. The heat also makes people and animals irritable, which can drive the wild asses to snap at each other with their front teeth.

A second piece of rhymed prose describes more effects of this heat:

When the Star rises,
meat is treated cautiously,
disease is feared,
and the mirage runs on the stony hills.Rhymed Prose

The intense heat causes meat to go bad much sooner than when the temperatures are milder. Of course, a summer desert has no ice, and even evening temperatures are too warm to keep cuts of meat preserved. The scarcity of herbage and the animals that feed on it reduces the nutritional intake of people and livestock alike, and those who are sick, or become sick on account of this, may not make it through the summer. In this setting, mirages cruelly taunt people with the appearance of pools of water that don’t actually exist. The 10th century scholar Ibn ‘Asim noted that mirages did not appear in the summer until Thuraya rose, a sure sign that the heat had significantly increased. 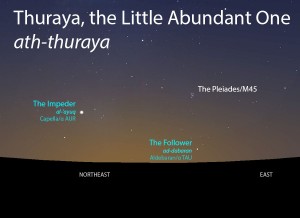 Thuraya (ath-thuraya) with her Impeder (al-‘ayuq) and Follower (ad-dabaran) as they appear rising in the east about 45 minutes before sunrise in late June. Sky simulation made with Stellarium.

Thuraya, the Star, is a brilliant star cluster whose total brightness comes from a dense core of six or more moderately bright stars that are easily visible to the naked eye. These stars are surrounded by scores of dimmer stars. Because the brightest of Thuraya’s stars are only moderately bright, the star cluster disappears in the growing light of dawn much faster than a single bright star would.

To locate Thuraya, look instead for the first rising of the bright white star that lies to its left, called ‘ayuq ath-thuraya, the Impeder of Thuraya. Yes, there is a tragic backstory here. A very old legend recounts how the beautiful Thuraya was betrothed to her suitor, ad-dabaran (the Follower), but the Impeder stood in the way of their marriage. To this day, the Impeder rises with Thuraya and looks down on the Follower when he later rises to continue chasing Thuraya across the sky. Because the Impeder is a single bright star, you will see it first as it rises with Thuraya.

To learn more about Thuraya, visit its entry in the Arabic Star Catalog: Thuraya (ath-thuraya, الثريا).

The heat gets even worse when the next star rises in about two weeks. Until then, don’t fear the mirages of summer, and let me know in the comments if you’ve been able to spot Thuraya rising next to her Impeder in the eastern sky.