The Arabic term hamal refers to a first-year lamb, not to a male ram like the Greeks saw in their constellation Aries. Specifically, the celestial Lamb is a lamb from among the fat-tailed sheep that were bred for their large fatty rumps and tails. The Horns of the Lamb were thus imagined as the two little nubs on the head of a first-year fat-tailed lamb, not the circular horns of a mature ram. 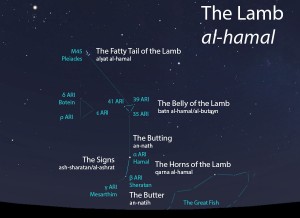 A pair of bright stars represents the two Horns of the Lamb. Further to the east, a trio of stars resembling three trivet stones arranged in an equilateral triangle form the Little Belly. The famous Pleiades star cluster represents the fleshy fat tail of the lamb.

The three parts of the Lamb each rise and set at different times as seen from the latitude of Tucson. Today we can expect to observe the Lamb setting in the west (about 45-60 minutes before sunrise) from mid-November through early December, and rising likewise throughout the month of May, as seen from the latitude of Tucson. (See How to Observe on the About page for more on this topic.)

In early listings of the lunar stations, the Two Horns of the Lamb (as the Two Signs, ash-sharatan) form the third station of the year, the Little Belly the fourth and the Fatty Tail of the Lamb (as ath-thuraya) the fifth. These were later changed to the first, second and third lunar stations, respectively, after the stations were adjusted to begin with the vernal equinox, which long ago took place amidst the Two Signs. The path of the moon through the sky takes it near the Two Horns first, followed by the Little Belly and then the Fatty Tail.

The Fatty Tail of the Lamb