The Amputated Hand is one of two hands of Thuraya, a brilliant star cluster that was anthropomorphized as a female figure. The Amputated Hand is shorter than the Henna-Dyed Hand (al-kaf al-khadib) and also lacks the well-defined elements of the latter. The Arabic term jadhma’ may also indicate that this hand was amputated because it was leprous. 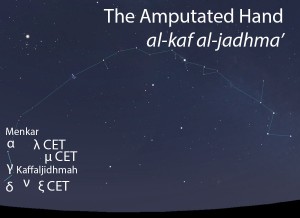 The Amputated Hand (al-kaf al-jadhma’) as it appears in the west about 45 minutes before sunrise in early November. Sky simulations made with Stellarium.

A scattered group of stars located south of the Signs (ash-sharatan). The Amputated Hand almost certainly included Menkar and Kaffaljidhmah (see below), but likely also included other nearby stars of modern-day eastern Cetus.

The stars of the Amputated Hand of Thuraya set with the Signs (ash-sharatan) and rise with Thuraya. Ibn Qutayba (d. 879 CE) reported that the Signs was said to set on the morning of October 16, and that Thuraya rose on the morning of May 13. On account of the precession of the equinoxes, today we can expect to observe the Amputated Hand setting in early November and rising at the end of May, as seen from the latitude of Tucson. (See How to Observe on the About page for more on this topic.)

The Amputated Hand does not figure among the rain stars.

The Amputated Hand is not one of the lunar stations.