Ancient Arab well buckets were made from a large leather pouch, and the ends of two intersecting, perpendicular wooden crossbars were fitted into the mouth of the pouch, forming it into a square shape. On account of this shape, each of the four sides could be used as a spout. The above stellar elements define the crossbars and the spouts they create, as well as the ropes that tie the crossbars together and connect the bucket to the well above. Please note that not all features of the Well Bucket were necessarily shared by the same group of people. This listing is necessarily anachronistic because of the limited information that remains. On the number of crossbars, please see the explanation on each of the Crossbar pages: The First Crossbars | The Rear Crossbars. 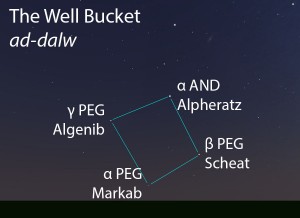 The Well Bucket (ad-dalw) as it appears setting in the west about 45 minutes before sunrise in early October. Sky simulations made with Stellarium.

Four bright stars form the shape of a large, near-perfect square, known in modern times as the Great Square of Pegasus. Three of these stars are blue-white, and the remaining one is a variable red giant that appears orange in the sky. These four stars are the Crossbars and Spouts. Two dimmer stars in the middle of the Bucket represent the Crossbar Rope. A bright orange star to the east of the Well Bucket marks the Well Rope, which may also have included one or two chains of stars.

The Well Bucket as a whole is marked by the following four stars. The first two mark the First Two Crossbars/First Spout. The third and fourth stars mark the Rear Two Crossbars/Second Spout.

Click the diagram above for a locator map for each of these stars.

The four stars of the Well Bucket each rise and set at different times as seen from the latitude of Tucson because its square of stars neither rests one of its sides on the horizon nor stands fully upright on one of its points. Today we can expect to observe the Well Bucket setting in the west (about 45-60 minutes before sunrise) from the beginning through the end of the month of October, and rising likewise throughout the month of March, as seen from the latitude of Tucson. (See How to Observe on the About page for more on this topic.)

In the rain star calendars of Qushayr and Qays, the four stars of the Well Bucket defined the ending of one sidereal year and the start of another. Although it took an entire month for all four stars to set, the second and third stars set just 6 days apart. The second star belongs to the First Crossbars (First Spout), and its morning setting marked the end of the year and concludes the autumnal harvest season called al-kharif. The third star belongs to the Rear Crossbars (Second Spout), and its morning settings marked the beginning of the new year, heralding the onset of the autumnal rainy season called al-wasmi.

In early listings of the lunar stations, the First Spout is the 28th and final station of the year, and the Second Spout then is the first station of the new year. These were later changed to the 26th and 27th lunar stations, respectively, after the stations were adjusted to begin with the vernal equinox. The path of the moon through the sky takes it near the First Spout (the star Markab) first and then the Second Spout (the star Algenib) on the next night.