The Well Rope is the main rope used to raise and lower the Well Bucket (ad-dalw). Ancient Arab well buckets were made from a large leather pouch, and the ends of two intersecting, perpendicular wooden crossbars were fitted into the mouth of the pouch, forming it into a square shape. The main rope attaches to the crossbar. 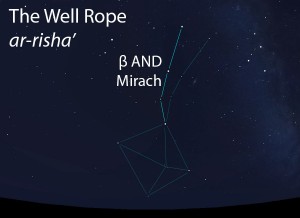 The Well Rope (ar-risha’) as it appears in the west about 45 minutes before sunrise in early October. Sky simulations made with Stellarium.

A bright orange star located to the east of the four bright stars that form the shape of a large, near-perfect square, known in modern times as the Great Square of Pegasus. The Well Rope included at least this star, but it is likely that the name more completely referred to a string of stars that extended from the Rear Crossbars of the Well Bucket through the bright stars of the modern constellation of Andromeda. A possible second Rope may be identified with a second string of stars that extends from the same point on the Bucket in a path that diverges farther to the north through Andromeda.

The star that certainly represented the Well Rope was also known as a lunar station by the name of the Fish (al-hut). Ibn Qutayba (d. 879 CE) reported that the Fish was said to rise on the morning of April 4 and set on the morning of October 5. On account of the precession of the equinoxes, today we can expect to observe the Well Rope setting in mid-November and rising at the end of March, as seen from the latitude of Tucson. (See How to Observe on the About page for more on this topic.)

The Well Rope does not figure among the rain stars.