The First Spout is a pair of stars that forms one of Two Spouts (al-farghan) of the square-shaped Well Bucket (ad-dalw), which is composed of four bright stars. Ancient Arab well buckets were made from a large leather pouch, and the ends of two intersecting, perpendicular wooden crossbars were fitted into the mouth of the pouch, forming it into a square shape. On account of this shape, each of the four sides could be used as a spout. The First Spout is the first pair of spout stars to rise and set. When the First Spout is setting, it appears to be pouring water out of the Bucket onto the earth. 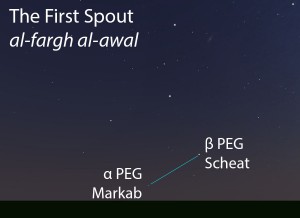 The First Spout (al-fargh al-awal) as it appears setting in the west about 45 minutes before sunrise in early October. Sky simulations made with Stellarium.

The western-most two of four bright stars that form the shape of a large, near-perfect square, known in modern times as the Great Square of Pegasus. One star is blue-white, and the other is a variable red giant that appears orange in the sky.

α PEG (Markab), blue-white star, magnitude 2.49
β PEG, (Scheat), variable red giant, magnitude 2.4 to 2.8
Of these two stars, Markab is the one that lies closest to the path of the moon through the sky.

In early listings of the lunar stations, the First Spout is the 28th and final station of the year. This was later changed to the 26th lunar station after the stations were adjusted to begin with the vernal equinox. The stars of the First Spout match the Hindu nakshatra called Purva Bhadrapada.