The first rain stars of the autumnal rainy season

The two names above can yield a bit of confusion regarding the number of crossbars, and part of this is due to the nature of the Arabic language. Like English, Arabic has grammatical forms for singular and plural things, but also a special form for two things, called the dual. Although used infrequently in modern times, the dual is especially common in old star names. The problem is that the actual well bucket generally used two pieces of wood as the two intersecting crossbars, but in the sky the sides (or spouts, al-farghan) are the stars that rise two by two. Therefore, when the crossbars are referred to as the First Two Crossbars and the Rear Two Crossbars, totaling four, we understand that each star is seen as the endpoint of a crossbar that starts at that corner of the bucket and ends at the center, where the four are tied together (see the Crossbar Rope, al-karab). These names for the crossbar stars appear earliest in the literature.

Later, we see them referred to as the Higher Crossbar (al-‘arquwa al-‘ulya) and the Lower Crossbar (al-‘arquwa as-sufla). These singular forms more accurately represent the mechanical construction of a well bucket with two solid crossbar pieces, but they do not reflect the reality of their correlates in the sky. Indeed, the Lower and Higher Crossbars are drawn using the two pairs of Spout stars instead of using the opposing pairs of stars that should form the ends of the two crossbars. In this way, one Crossbar (two stars, using the singular form ‘arquwa) is identified with one Spout (singular, fargh), and the Two Crossbars (four stars, using the dual form ‘arquwatan) with the Two Spouts (dual, al-farghan). This usage may reflect a newer focus on the Crossbars as a concept consistent with the Two Spouts, in contrast to the older focus on their actual appearance in the night sky. The alternate designation of the Rear Crossbars as the Lower Crossbar also suggests a preference for viewing this pair of stars as the stars are rising in the sky, which is the only orientation that displays them below the other two stars, the Higher Crossbar. This orientation is reflected in rhymed prose, most of which describes stars as they rise. 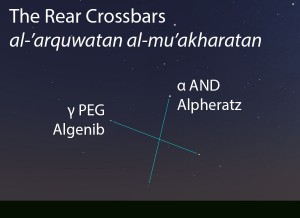 The Rear Crossbars (al-‘arquwatan al-mu’akharatan) as they appear in the west about 45 minutes before sunrise in early October. Sky simulations made with Stellarium.

The eastern-most two of four bright stars that form the shape of a large, near-perfect square, known in modern times as the Great Square of Pegasus. Both stars are blue-white.

The two stars of the Rear Crossbars do not rise or set at the same time. On account of the precession of the equinoxes, today we can expect to observe the Rear Crossbars setting in mid-October and rising in late March, as seen from the latitude of Tucson. (See How to Observe on the About page for more on this topic.)

In the calendars of Qushayr and Qays, the morning setting of the Rear Crossbars begins the new year and heralds the onset of the autumnal rainy season called al-wasmi. This season is so named because the rains literally mark (yasim) the ground in terms of both the force with which the heavy rains hit the parched earth and the green foliage that quickly appears as a result of the rain.

The Rear Crossbars are part of the Well Bucket (ad-dalw, الدلو) folkloric celestial complex. They are connected at the center of the Bucket by a Crossbar Rope (al-karab, الكرب).