Part of the Lamb celestial complex

The Arabic term hamal refers to a first-year lamb, not to a male ram like the Greeks saw in their constellation Aries. Specifically, the celestial Lamb is a lamb from among the fat-tailed sheep that were bred for their large fatty rumps and tails. The Horns of the Lamb were thus imagined as the two little nubs on the head of a first-year fat-tailed lamb, not the circular horns of a mature ram. Some Arabs also called this pair of stars the Butting (al-nath) and the Butter (al-natih). 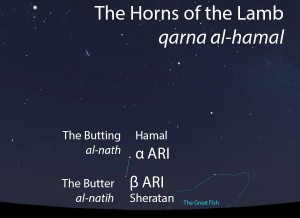 The Horns of the Lamb (qarna al-hamal) as they appear setting in the west about 45 minutes before sunrise in mid-November. Sky simulations made with Stellarium.

A pair of bright stars located southeast of the Great Fish, roughly between the modern-day Square of Pegasus and the Pleiades star cluster.

The two stars of the Horns of the Lamb rise together but set about 5 days apart. They were also known as a lunar station by the name of the Two Signs (ash-sharatan). Ibn Qutayba (d. 879 CE) reported that the Two Signs was said to rise on the morning of April 16 and set on the morning of October 16. On account of the precession of the equinoxes, today we can expect to observe the Horns of the Lamb setting in early November and rising at the end of April, as seen from the latitude of Tucson. (See How to Observe on the About page for more on this topic.)

In the calendars of Qushayr and Qays, the Horns of the Lamb are known as the Sign (ash-sharat), whose morning setting occurs during the autumnal rainy season called al-wasmi.

The Little Belly of the Lamb