We’ve been following in parallel two different but connected star calendars in use by Arabs long ago, the rain star calendar used by the people of Qushayr and the standardized calendar of lunar stations. Whereas the lunar stations were somewhat evenly spaced across the sky, following the ecliptic (the moon’s path through the night sky), any bright star could function as a rain star if there was rain when it set. Up to this point, the two calendars have followed more or less the same path through the pre-dawn sky, and there is good reason for this: most of the bright stars used as rain stars so far have been located near the ecliptic.

The setting of the Two Sky-Raisers (as-simakan) begins a significant departure for the rain stars of Qushayr, because the Spear-Bearing Sky-Raiser (as-simak ar-ramih) lies far to the north of the moon’s path. While the Two Sky-Raisers define the 40-day period of summer rains (as-sayf), the calendar of lunar stations continues from the Unarmed Sky-Raiser (as-simak al-a’zal) along the ecliptic toward the Scorpion (al’aqrab). These two calendars will not be aligned again until the setting of the Well Bucket occurs at the end of the year.

There blew a wind belonging to the Claw of the Scorpion,
one of its hot, violent winds of summer that carry the dust,
a hot, parching wind that boiled away
the water from the makeshift wooden cisterns
and the standing pools of water from which the lote-trees grow.Dhu ar-Rumma
735 C.E.

How to observe the Scorpion 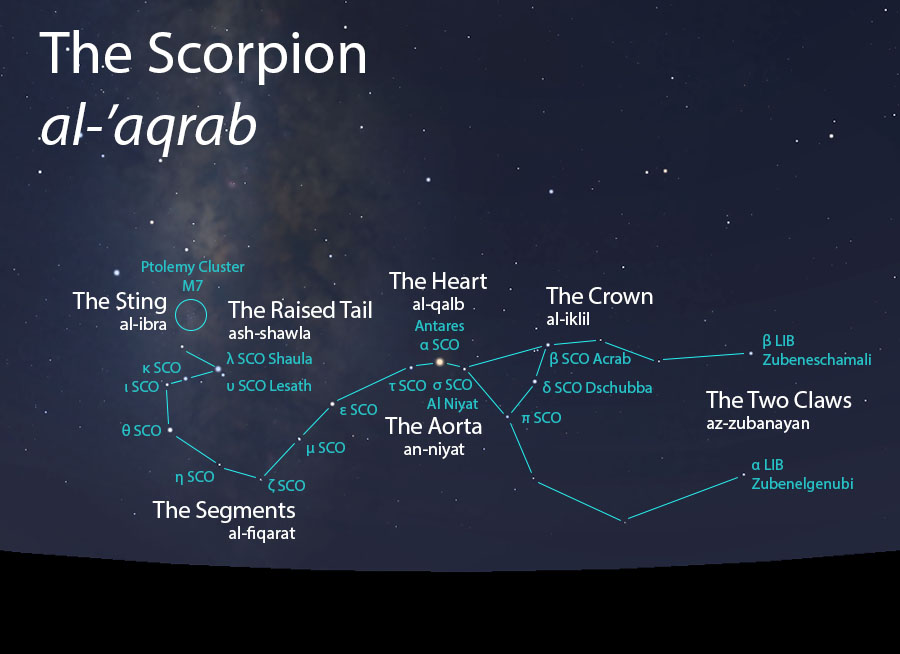 The proper time to observe a star’s morning setting (or rising) is called ghalas in Arabic, a time when the darkness of night mixes with the white and red light of dawn in the tracts of the horizon (How to Observe). Look to the western horizon about 45 minutes before your local sunrise (times available at timeanddate.com). When the Scorpion begins to set, its form stretches out along the southwestern horizon. Look for a bright red star, which is its Heart (al-qalb). The Tail forms an S-shape to the left of the Heart, and the Claws extend to the right. The Scorpion was well-defined with Two Claws, a Head (Crown), a Heart with its Aorta, Segments, a Raised Tail and a Sting.

The elements of the Scorpion as lunar stations

The Arabian Scorpion followed the image of the scorpion defined by the Sumerians more than 3000 years ago. The first part of the Scorpion to set was its Two Claws (az-zubanayan), a pair of stars that marked the 16th lunar station, usually mentioned in the singular, the Claw (az-zubana). Its setting in the heat of the summer was associated with the blowing of the hot, dust-laden winds that the 8th century poet Dhu ar-Rumma mentioned in his poem above. The more southerly of the pair was the first to set, followed by the northern star a week and a half later.

Just before the second Claw set, the Scorpion’s Crown (al-iklil) began to set. This asterism consisted of three bright stars arranged in a row like the central three stars of Jawza’. They represented the Head (ar-ra’s) of the Scorpion and the 17th lunar station. When the Crown set, the waters of the ground dried up and did not return until the heavy rains of autumn fell on the earth. Like the Two Claws, the stars of the Crown are arranged in a north-south direction, and they took about a week to set from first to last. A day before the last star set, the Spear-Bearing Sky-Raiser (as-simak ar-ramih) set, marking the end of the summer rainy period (as-sayf).

At this time, too, was the setting of the 18th lunar station, the Heart of the Scorpion (qalb al-‘aqrab). This is a brilliant red star that is flanked on both sides by two dimmer white stars that were together regarded as its Aorta (an-niyat). When the Heart set, it was arranged with its Aorta in a short line along the horizon. Proceeding from the Heart to the left are a number of bright stars that are arranged in a hook-like shape. These were regarded as the Segments (al-faqar or al-fiqarat) of the Scorpion’s exoskeleton. Some of these stars began to set right after the first star of the Claws set. By the time the Heart set, nearly all of the Segments had set, too.

The final lunar station of the Scorpion (the 19th lunar station overall) was the Raised Tail (ash-shawla), with its Sting (al-ibra) located nearby. The Raised Tail is a pair of bright stars that are so close to each other they almost appear to touch. As the Raised Tail is setting, its Sting is located just above and the left of the pair of almost-touching stars and appears as a large cluster of dim stars. The Sting is best observed earlier in the morning, when the sky is still dark and it is higher above the horizon, where the thickness of the atmosphere would otherwise block its light.

This part of the star calendar blog entry is usually where I tell you how the long-standing Arabic star names were effaced through the adoption of Greek astronomy among the Arabs. That is not the case this time, likely on account of the Scorpion’s readily recognizable figure in the sky and its long-standing significance that dates back to ancient Mesopotamia. Although in the east the Scorpion bore the same form from ancient Sumerian times through to the time of the Arabs, the Greeks somehow inherited from the Babylonians a scorpion that had lost its giant Claws. Those two stars were instead used to define the Greek constellation of Libra, the balance. Despite this, the two stars of the Two Claws survive in near-perfect form in the internationally recognized star names of Zubeneschamali (β LIB), from the Arabic az-zubana ash-shamali (“the Northern Claw”) and Zubenelgenubi (α LIB), from the Arabic az-zubana al-janubi (“the Southern Claw”). Additionally, the star Zubenelakrab (γ LIB) in the left Claw of the Scorpion is a direct transliteration of the Claw of the Scorpion (zubana’l-‘aqrab).

In the Crown of the Scorpion, modern-day star names Dschubba (δ SCO) and Jabbah (ν SCO) recall the description of the Crown as the forehead (al-jabha) of the Scorpion, the same term used to describe the Forehead of the Lion (jabhat al-asad). In addition the whole of the Scorpion is preserved in the star name Acrab (β SCO), the name for a star located right by the Crown.

The first of the two Aorta stars is today known as Niyat (σ SCO), a direct transliteration of the Arabic term for the aorta. Finally, in the Raised Tail of the Scorpion, one of the two stars that almost touch is called today Shaula (λ SCO), another well-preserved transliteration of the Arabic ash-shawla. The other star is called Lesath (υ SCO), which ultimately derives from the Arabic term latkha, “a spot,” used long ago by the Arabs to describe the nebulous appearance of the star cluster that marks the Sting, when viewed with unaided eyes.

All in all, nearly every part of the Scorpion as described by the Arabs has survived as modern-day star names that still reference their original positions. The only star that falls outside this pattern is the bright red stars that for the Arabs marked the Heart. Among the Greeks, this star was seen to be similar in appearance to the planet Mars, which represented the Greek god of war, Ares. The Scorpion’s red star was thus named Antares, meaning “similar to Ares”. Now, how could a scorpion’s Heart compete with that?

Rainless days are here to stay in our next post, when we encounter some desert wildlife.