The Two Claws (az-zubanayan) are part of the Arabian constellation of the Scorpion (al-‘aqrab). The Arabian Scorpion followed the image of the scorpion defined by the Sumerians more than 3000 years ago. The Two Claws were often recalled in the singular, the Claw (az-zubana), within the context of the lunar stations. The two stars that were called the Two Claws marked the tips of each Claw. 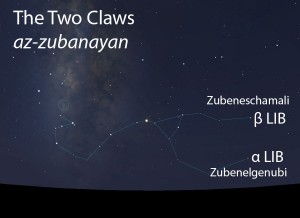 The Two Claws (az-zubanayan) of the Scorpion (al-‘aqrab) as they appear in the west about 45 minutes before sunrise in mid-May. Sky simulations made with Stellarium.

A pair of moderately bright stars that follow after the Two Sky-Raisers (as-simakan).

The two stars that mark the Two Claws rise together but set about a week and a half apart. Ibn Qutayba (d. 879 CE) reported that the Claw (possibly the more southern of the two stars) was said to rise on the morning of November 1 and set on the morning of May 1. On account of the precession of the equinoxes, today we can expect to observe the Two Claws setting in late May and rising in late November, as seen from the latitude of Tucson. (See How to Observe on the About page for more on this topic.)

The Two Claws of the Scorpion do not figure in the calendar of the rains stars.

In early listings of the lunar stations, the Claw (az-zubana, the singular form) is the 18th station of the year. This was later changed to the 16th lunar station after the stations were adjusted to begin with the vernal equinox. The stars of the Two Claws match part of the Hindu nakshatra called Visakha.