An asterism of the summer rainy season

In ancient Arabic, the term simak indicated something that was used to raise something else high up. When the Two Sky-Raisers reached the midpoint of their travels across the night sky, the uppermost one was almost at the zenith, right over your head, and the lower Sky-Raiser was almost directly below it, about halfway up the sky. The Two Sky-Raisers were the pillars that held up the canopy of the heavens. 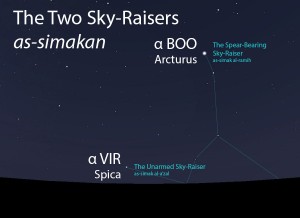 The Two Sky-Raisers (as-simakan) as they appear setting in the west about 45 minutes before sunrise in late April. Sky simulations made with Stellarium.

A pair of very bright stars that are spaced widely apart.

The Two Sky-Raisers set about 40 days apart but rise within a week of each other. Ibn Qutayba (d. 879 CE) reported that the Unarmed Sky-Raiser (the first of the pair to set and the second to rise) was said to rise on the morning of October 6 and set on the morning of April 5. On account of the precession of the equinoxes, today we can expect to observe the Two Sky-Raisers setting in late April and early June, and rising in late October, as seen from the latitude of Tucson. (See How to Observe on the About page for more on this topic.)

In the calendars of Qushayr and Qays, the morning settings of the Two Sky-Raisers defined the start and end of the short rainy season of summer (as-sayf).