Of the Two Fish, the Great Fish is a very old asterism dating back to Babylonian times. The Smaller Fish is likely not as old, but its origin is unknown. Please note that not all features of the Two Fish were necessarily shared by the same group of people. This listing is necessarily anachronistic because of the limited information that remains. 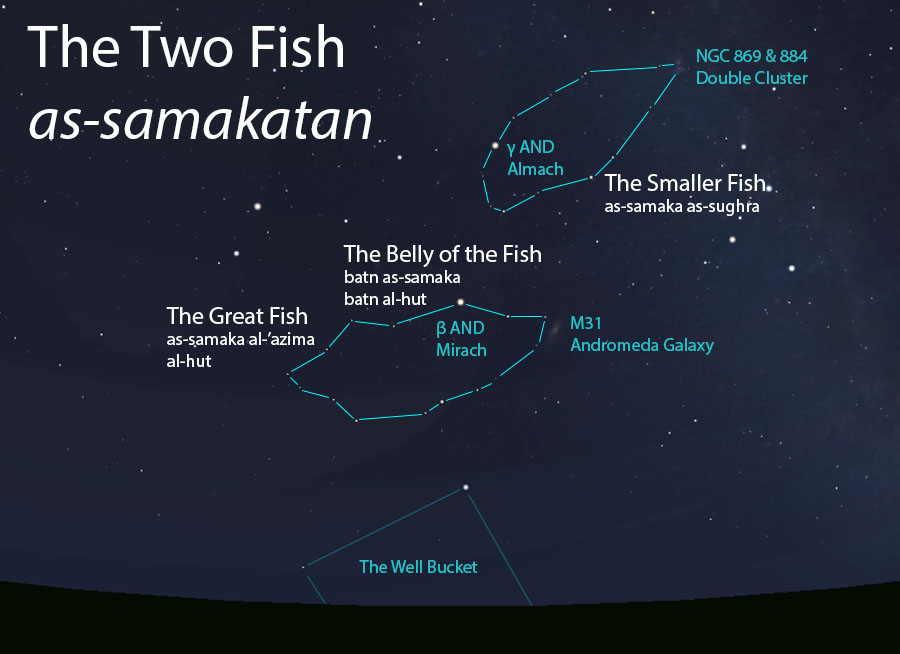 The Great Fish (al-hut or as-samaka al-‘azima) and the Smaller Fish (as-samaka as-sughra) as they appear in the west about 45 minutes before sunrise in mid-October. Sky simulations made with Stellarium.

Only the two Belly stars are bright enough to be used in pre-dawn star calendars. Today we can expect to observe the Great Fish setting in the west (about 45-60 minutes before sunrise) in mid-November, and rising at the end of March, as seen from the latitude of Tucson. The Smaller Fish will set in early December and rise in the beginning of April. (See How to Observe on the About page for more on this topic.)

The Two Fish do not play a role in the rain star calendars of Qushayr and Qays.

In early listings of the lunar stations, the Great Fish is the second station of the year. This was later changed to the 28th lunar station after the stations were adjusted to begin with the vernal equinox. The path of the moon through the sky, however, does not take it very close to the Belly of the Great Fish, so its utility within the calendar is questionable.