The Great Fish as al-hut is identical in appearance to as-samaka al-‘azima. Only the names and their uses differ. Grammatically, samaka is any fish, and the adjective ‘azima means great or large. In contrast to this, the word hut in itself indicates a large fish. 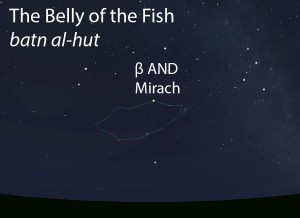 The Belly of the Great Fish (batn al-hut) as it appears in the west about 45 minutes before sunrise in mid-October.

A bright orange star located to the east of the four bright stars that form the shape of a large, near-perfect square, known in modern times as the Great Square of Pegasus. This star itself is the Belly of the Fish, and the faint stars that circle through it form the rest of the Great Fish. It shape is formed by two chains of stars that emanate from its mouth (the Andromeda Galaxy) and extend to its tail in modern-day Pisces. The stars listed below have been identified by as-Sufi (d. 986 CE) as making up the outline of the Great Fish, but other stars along these chains were no doubt part of the picture. 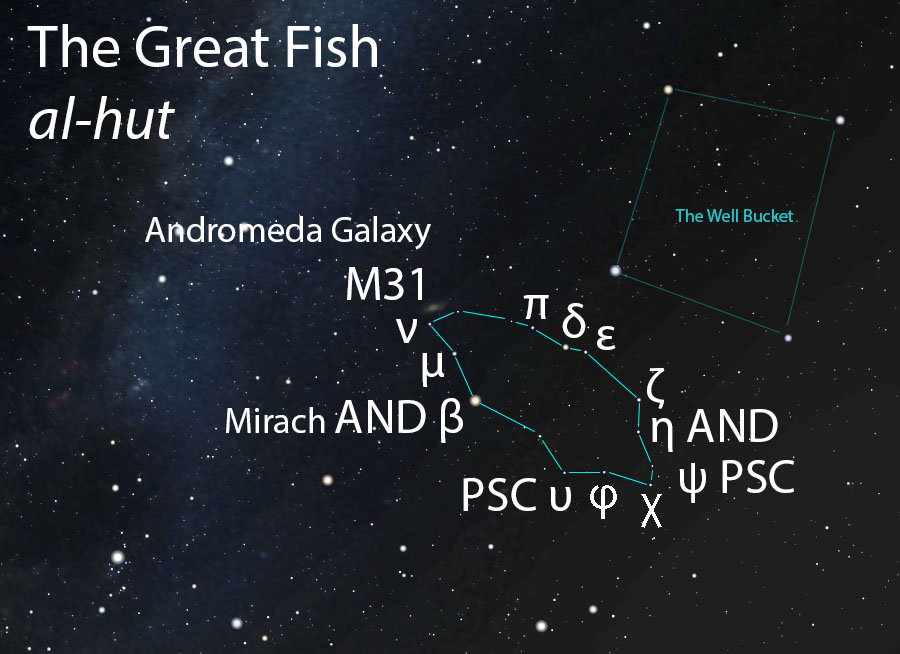 The Great Fish (al-hut) as it appears in the east under dark skies about 1 hour after sunset in mid-October. Sky simulations made with Stellarium.

Ibn Qutayba (d. 879 CE) reported that the Great Fish was said to rise on the morning of April 4 and set on the morning of October 5. On account of the precession of the equinoxes, today we can expect to observe the Great Fish setting in mid-November and rising at the end of March, as seen from the latitude of Tucson. (See How to Observe on the About page for more on this topic.)

The Great Fish does not figure among the rain stars.