The Tip of the Nose

The Tip of the Nose is part of the Arabian megaconstellation of the Lion (al-asad). The related verb nathara means “to scatter” or “to disperse,” so the noun an-nathra in its basic sense indicates “a scattering.” For obvious reasons, this word also came to indicate a sneeze, and by extension the tip of the nose, the place from which the sneeze originates. This is precisely what the Arabs saw in the Tip of the Nose, a pair of dim stars that appear to have sneezed out the star cluster, which on account of its dimness appears as a fuzzy blotch in the sky. More explicitly, some Arabs saw the two stars of the Tip of the Nose as the Two Nostrils (al-mankhiran) and the star cluster alone as the Sneeze (an-nathra). 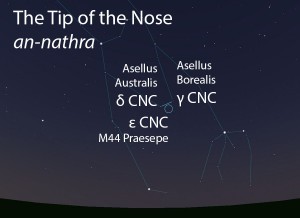 The Tip of the Nose (an-nathra) as it appears in the west about 45 minutes before sunrise in early January. Sky simulations made with Stellarium.

A pair of unremarkable stars with a nearby faint star cluster that appears as a patch of cloud in the night sky.

Ibn Qutayba (d. 879 CE) reported that the Tip of the Nose was said to rise on the morning of July 18 and set on the morning of January 18. On account of the precession of the equinoxes, today we can expect to observe the Tip of the Nose setting in early February and rising in mid-August, as seen from the latitude of Tucson. (See How to Observe on the About page for more on this topic.)

In the calendars of Qushayr and Qays, the morning setting of the Tip of the Nose occurs during the cold winter season called ash-shita’.

The Tip of the Nose is part of the Lion (al-asad, الأسد) folkloric celestial complex, which extends from the Two Forearms (adh-dhira’an, الذراعان) to the Two Shanks (as-saqan, الساقان).