The Claws extend from the Extended Forearm (adh-dhira’ al-mabsuta), one of the Two Forearms (adh-dhira’an) of the Arabian megaconstellation of the Lion (al-asad). 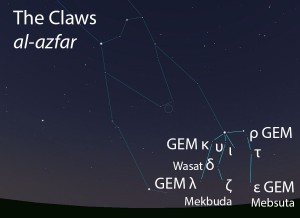 The Claws (al-azfar) as they appear in the west about 45 minutes before sunrise in early January. Sky simulations made with Stellarium.

A few rows of stars that extends out from the Extended Forearm.

The Claws begin to set with the setting of the Clenched Forearm and conclude with the setting of the Extended Forearm. On account of the precession of the equinoxes, today we can expect to observe the Claws setting throughout January and rising from late July into early August, as seen from the latitude of Tucson. (See How to Observe on the About page for more on this topic.)

The Claws do not figure among the rain stars.

The Claws are not one of the lunar stations.

The Claws are part of the Lion (al-asad, الأسد) folkloric celestial complex, which extends from the Two Forearms (adh-dhira’an, الذراعان) to the Two Shanks (as-saqan, الساقان).

The Tip of the Nose