The Tattoo of the Wrist 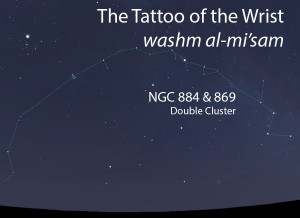 The Tattoo of the Wrist (washm al-mi’sam) as it appears in the west about 45 minutes before sunrise in early November. Sky simulations made with Stellarium.

A small fuzzy patch of the Milky Way located just east of a bright group of five stars arranged in the shape of a “W”. The Tattoo of the Wrist is a pair of dense star clusters known as the Double Cluster of Perseus. Individual stars in this cluster require binoculars or telescope to be resolved.

Depending upon your observing location, the Tattoo may be circumpolar, so it never sets below the horizon. As a diffuse object, it cannot be tracked all the way to the horizon, but its position relative to other stars may be ascertained. From the latitude of Tucson, the Tattoo dips below the horizon briefly, about the time that the Brand (al-han’a) sets. Ibn Qutayba (d. 879 CE) reported that the Brand was said to set on the morning of December 22. On account of the precession of the equinoxes, today we can expect to observe the Tattoo setting in early January and rising in the middle of February, as seen from the latitude of Tucson. (See How to Observe on the About page for more on this topic.)

The Tattoo of the Wrist does not figure among the rain stars.

The Tattoo of the Wrist is not one of the lunar stations.

The Forearm of Thuraya