The Little Belly of the Lamb

The Belly of the Lamb is a trio of stars located between the Horns of the Lamb (qarna al-hamal) and its Fatty Tail (alyat al-hamal). The Arabic term hamal refers to a first-year lamb, not to a male ram like the Greeks saw in their constellation Aries. Specifically, the celestial Lamb is a lamb from among the fat-tailed sheep that were bred for their large fatty rumps and tails. 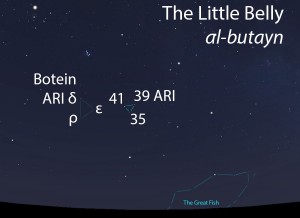 A trio of stars located between the Two Signs and the modern-day Pleiades star cluster. The stars are arranged in an equilateral triangle that resembles the placement of trivet stones under a cooking pot. Two groups of stars have been identified by different authors as the Little Belly. The first group (35, 39 and 41 ARI) is brighter and more likely to have been used as part of the calendar of lunar stations. This group is also consistent with the stars of the corresponding Indian nakshatra in this area of the sky (see below).

The Little Belly of the Lamb does not figure among the rain stars.

In early listings of the lunar stations, the Little Belly (al-butayn) is the fourth station of the year. This was later changed to the second lunar station after the stations were adjusted to begin with the vernal equinox. The stars of the Little Belly match the Hindu nakshatra called Bharani.

The Fatty Tail of the Lamb