The Hair Whorl is named for the curled tuft of hair that sometimes appears on the chest of a horse. It is one of 18 such whorls that can be present on the face and body of a horse. 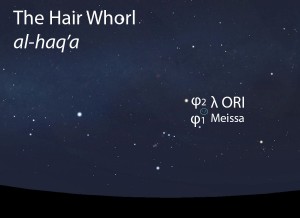 The Hair Whorl (al-haq’a) as it appears in the west about 45 minutes before sunrise in early December. Sky simulations made with Stellarium.

A trio of average stars that are arranged like an equilateral triangle and appear above and between the two stars of the Hands of Jawza’.

Ibn Qutayba (d. 879 CE) reported that the Hair Whorl was said to rise on the morning of June 10 and set on the morning of December 10. On account of the precession of the equinoxes, today we can expect to observe the Hair Whorl setting in mid-December and rising in mid-July, as seen from the latitude of Tucson. (See How to Observe on the About page for more on this topic.)

The Hair Whorl does not figure in the calendar of the rains stars.

In early listings of the lunar stations, the Hair Whorl is the seventh station of the year. This was later changed to the fifth lunar station after the stations were adjusted to begin with the vernal equinox.