The Follower is a very bright, red star that immediately follows Thuraya as the stars move westward across the sky. The most honored star grouping in the sky, Thuraya was often called “the Asterism” (an-najm). 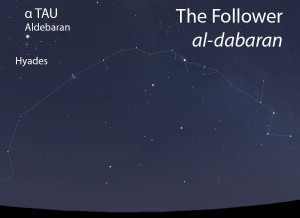 The Follower of Thuraya (ad-dabaran) as it appears in the west about 45 minutes before sunrise in early November. Sky simulations made with Stellarium.

A very bright, red star located southeast of Thuraya, which is known in contemporary astronomy as the Pleiades star cluster.

Ibn Qutayba (d. 879 CE) reported that the Follower of Thuraya was said to rise on the morning of May 26 and set on the morning of November 26. On account of the precession of the equinoxes, today we can expect to observe Thuraya setting in early December and rising in late June, as seen from the latitude of Tucson. (See How to Observe on the About page for more on this topic.)

In the calendars of Qushayr and Qays, the morning setting of the Follower occurs after the end of the autumnal rainy season called al-wasmi. The Follower does not figure into the rain calendar at this point; instead, its pre-dawn rising 6 months later heralds the onset of al-hamim, the most vehement heat of summer.

In early listings of the lunar stations, the Follower is the sixth station of the year. This was later changed to the fourth lunar station after the stations were adjusted to begin with the vernal equinox. The star of the Follower matches the Hindu nakshatra called Rohini.

The Follower was the second star of summer (as-sayf) in the rising star calendar presented by Qutrub (d. 821 CE).

Thuraya, the Abundant Darling of the Heavens
When the Follower Rises

The Hands of Thuraya