The Tail Hair is part of the Arabian megaconstellation of the Lion (al-asad). It is the coarse tuft of hair at the end of the Lion’s tail, which was pictured to be above the Two Haunches (al-warikan). 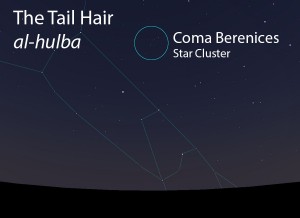 The Tail Hair (al-hulba) as it appears in the west about 45 minutes before sunrise in early March. Sky simulations made with Stellarium.

A cluster of widely-spaced stars that comprise the bulk of the modern constellation Coma Berenices.

The Tail Hair was represented by most of the numbered stars in Coma Berenices, which comprise the very large cluster of stars. The densest concentration includes the stars 14, 16, 13, 12, 17, 21, 18 Comae, most of which are of the fifth magnitude in brightness.

The Tail Hair set about a week and a half after the Unarmed Sky-Raiser. Ibn Qutayba (d. 879 CE) reported that the Unarmed Sky-Raiser (the first of the pair to set and the second to rise) was said to rise on the morning of October 6 and set on the morning of April 5. On account of the precession of the equinoxes, today we can expect to observe the Tail Hair setting in late April, and rising in late September, as seen from the latitude of Tucson. (See How to Observe on the About page for more on this topic.)

The Tail Hair of the Lion does not figure in the calendar of the rains stars.

The Tail Hair of the Lion is not one of the lunar stations.

The Tail Hair is part of the Lion (al-asad, الأسد) folkloric celestial complex, which extends from the Two Forearms (adh-dhira’an, الذراعان) to the Two Shanks (as-saqan, الساقان).