The Crossbar Rope is a pair of stars located near the center of the four Crossbar stars (al-‘araqi) that define the four corners of the square-shaped Well Bucket (ad-dalw). Ancient Arab well buckets were made from a large leather pouch, and the ends of two intersecting, perpendicular wooden crossbars were fitted into the mouth of the pouch, forming it into a square shape. The Crossbar Rope was used to tie the two crossbars together at the place where one intersected with the other. 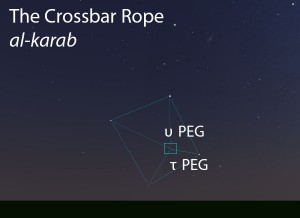 The Crossbar Rope (al-karab) as it appears in the west about 45 minutes before sunrise in early October. Sky simulations made with Stellarium.

Two white stars located near the center of the four bright stars that form the shape of a large, near-perfect square, known in modern times as the Great Square of Pegasus. These are the two brightest stars inside the Square, but they are still much fainter than the stars that make up the Square.

The two stars of the Crossbar Rope rise and set at about the same time as the second star of the First Crossbars (First Spout), but they are not bright enough to remain visible in the pre-dawn glow of the sky. They do appear with the Well Bucket in its setting during October and its rising during March.

The Crossbar Rope does not figure among the rain stars, likely due to the close proximity of other much brighter stars.

The Crossbar Rope is not one of the lunar stations.