The desolation of scorched earth and rainless days

What comes to mind when you think of summer? Longer days, sunny weather, a dip in the pool or a visit to the beach? Do you recall the flaming summer barbecues? So did the Arabs long ago, because the hot desert felt like a living barbecue.

We’ve been tracking the seasonal rains as the weather has grown progressively hotter. Now, for the first time, we encounter a season in which there is no rain at all, the sweltering hamim. This is the most vehement heat of summer, when the days are oppressively hot and the nights don’t even make it down to room temperature. The Arabic word hamim brings to mind the blackening of hot coals or the charring of wood as a result of intense heat.

At this time of blistering heat, a flock of Ostriches (an-na’a’im) sets in the west just before sunrise, while an old friend rises in the east.

He follows behind some ostriches,
those arriving at the water to drink
and those returning from the water,
wherever they appear, glistening.Al-Husni
7th century C.E.

How to observe the Ostriches 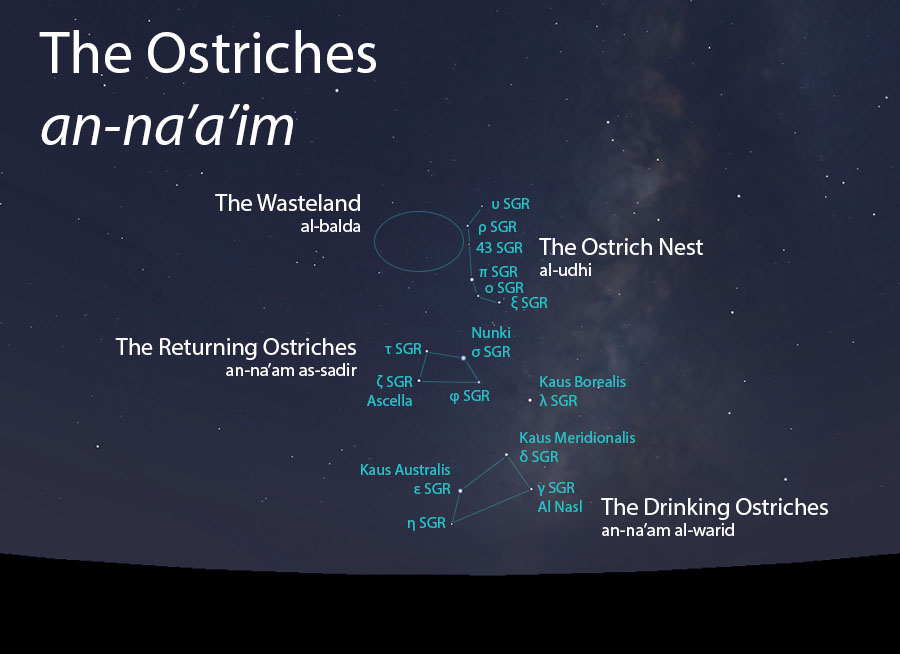 The proper time to observe a star’s morning setting (or rising) is called ghalas in Arabic, at time when the darkness of night mixes with the white and red light of dawn in the tracts of the horizon (How to Observe). Look to the western horizon about 45 minutes before your local sunrise (times available at timeanddate.com). The Ostriches are clustered in two groups of four individuals, each group forming an uneven quadrilateral in the sky. The first group to set are the Drinking Ostriches (an-na’am al-warid), who are still standing in the river of the Milky Way. The second group, located above the first as they are setting, are the Returning Ostriches (an-na’am as-sadir), who have already drunk from the river and are now walking away from it to return home to their Nest (al-udhi) with its eggs.

The rising of the Follower 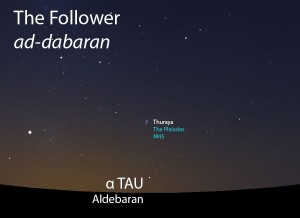 The Follower (ad-dabaran) as it appears rising in the east about 45 minutes before sunrise in late June.

Following the setting of the Spear-Bearing Sky-Raiser (as-simak ar-ramih), marking the end of the period of summer rains (as-sayf), the rain star calendar of Qushayr identifies a season with no rain at all, the hamim. It was the hottest part of the year, a time of oppressive heat without any rain. Because there was no rain during this time, the rain period had no rain stars, but the period began with the rising of the Follower (ad-dabaran) of Thuraya in the east just before sunrise. This is the only time in the rain star calendar of Qushayr that we see the rising of a star used to mark a season.

The Follower rose about two weeks after the last stars of the Scorpion (al-‘aqrab) set, and about five days before the first star of the Ostriches set. The calendar of Qushayr designates the hamim as a brief period lasting 20 days. Some sources identify the hamim with the season called al-qayz by other tribes of the Arabian Peninsula, which could last as long as a few months.

The Ostriches and the Wasteland as lunar stations

The 20th lunar station was the Ostriches (an-na’a’im), a group of eight stars that represented two groups of ostriches. The first group of four stars to set were called the Drinking Ostriches an-na’am al-warid, so named because they were located in the river, the cloud-like band of the Milky Way. The second group of four stars were called the Returning Ostriches (an-na’am as-sadir) because they were imagined to have drunk already and were now returning from the river. Immediately above and between the two groups of Ostriches is a ninth star that was said to form the hump of a camel when joined with the other eight stars.

The whole of the Ostriches took about two weeks to set, from the first star of the Drinking Ostriches to the last star of the Returning Ostriches. The Follower rose shortly before the first of the Ostriches set, putting their setting firmly in the hot, dry period of hamim. Not far from the Returning Ostriches was the Ostrich Nest (al-udhi), a semi-circular group of six stars that resembles the widespread arrangement of ostrich eggs in their nest. These stars were not part of the lunar station. Outside of the celestial complex of the lunar stations, this same star grouping was called the Necklace (al-qilada) or, less commonly, the Bow (al-qaws).

Following the Ostriches was an unusual lunar station (the 21st) called the Wasteland (al-balda). It is remarkable because it was not marked by any stars; just the opposite, it was an area in the sky that was devoid of stars, hence its name. The Wasteland was located between the Ostriches and the 22nd lunar station. Sometimes the Moon deviated from its path through the Wasteland and instead stationed at the Ostrich Nest next to it.

The desolation of the Ostriches

No remnant of the Ostriches nor the Wasteland has survived into modern-day astronomy. The Greek image of Sagittarius the Archer supplanted the Arab asterism of the Ostriches in this region of the sky. Because Sagittarius already had a bow, located in part where the Drinking Ostriches were, the Arabs called the Greek constellation as a whole the Bow (al-qaws) or the Archer (ar-rami). The stars in this region bear modern names that combine this Arabic designation with Latin descriptions of their relative positions: Kaus Borealis (λ SGR, “the northern bow”), Kaus Meridionalis (δ SGR, “the medial bow”) and Kaus Australis (ε SGR, “the southern bow”). Another of the Drinking Ostriches represented the Blade (an-nasl) of the arrow, and this Arabic description of the Greek figure survives as Al Nasl (γ SGR).

In the next post, the weather finally begins to cool off as two vultures set, along with a number of lucky asterisms.