The setting of the Weather Change was said to bring about such a smile on account of the growing herbage and flowers of spring. Its name comes from the verb sarafa, which means “to turn back from its way” or “to shift from one condition to another.” It was so named because at its setting before dawn in late March (or mid-April for us today) the cold turned away and changed to warmth. Likewise, its dawn rising just ahead of the sun signaled the turning away of the heat and the transition to cold weather. 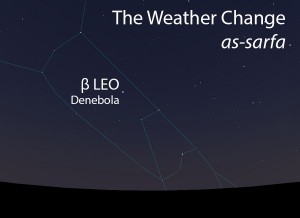 The Weather Change (as-sarfa) as it appears in the west about 45 minutes before sunrise in early March. Sky simulations made with Stellarium.

A solitary bright star that comes right after the Mane (az-zubra).

Ibn Qutayba (d. 879 CE) reported that the Weather Change was said to rise on the morning of September 10 and set on the morning of March 10. On account of the precession of the equinoxes, today we can expect to observe the Weather Change setting in mid-April and rising in late September, as seen from the latitude of Tucson. (See How to Observe on the About page for more on this topic.)

In the calendars of Qushayr and Qays, the morning setting of the Weather Change marks the end of the warm spring rainy season (ad-dafa’i) and the turn toward summer (as-sayf).

In early listings of the lunar stations, the Weather Change is the 14th station of the year. This was later changed to the 12th lunar station after the stations were adjusted to begin with the vernal equinox. The stars of the Mane match the Hindu nakshatra called Uttara Phalguni.

The star that marks the Weather Change also represents the Sheath of the Penis of the Lion (qunb al-asad, قنب الأسد) within the context of the Lion (al-asad, الأسد) folkloric celestial complex.

The Sheath of the Penis of the Lion