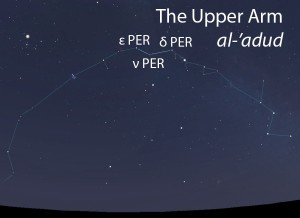 The Upper Arm (al-‘adud) as it appears in the west about 45 minutes before sunrise in early November. Sky simulations made with Stellarium.

An elongated group of stars located between the Elbow and Thuraya.

The stars of the Upper Arm set together about the time that the Brand (al-haq’a) sets, but they rise separately over the course of 2 weeks. Ibn Qutayba (d. 879 CE) reported that the Brand was said to set on the morning of December 9. On account of the precession of the equinoxes, today we can expect to observe the Upper Arm setting in early January and rising throughout the month of May, as seen from the latitude of Tucson. (See How to Observe on the About page for more on this topic.)

The Upper Arm does not figure among the rain stars.

The Upper Arm is not one of the lunar stations.

The Tip of the Elbow