The Two Haunches (al-warikan) are part of the Arabian megaconstellation of the Lion (al-asad). They come right after the bright star that represents the Sheath of the Penis of the Lion (qunb al-asad). 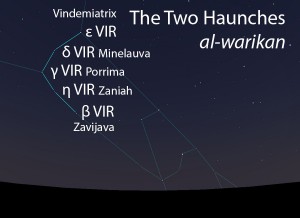 The Two Haunches (al-warikan) as they appear in the west about 45 minutes before sunrise in early March. Sky simulations made with Stellarium.

A grouping of four or five stars that resembles either the Arabic letter kaf in its medial form (ىكى) or the Arabic letter alif in its final form (ىا). For English readers, it could be said to look like a tilted capital L, or perhaps a less-than sign (<).

Ibn Qutayba (d. 879 CE) reported that the Howling Dogs were said to rise on the morning of September 23 and set on the morning of March 23. On account of the precession of the equinoxes, today we can expect to observe the Two Haunches setting from early to late April and rising from late September to mid-October, as seen from the latitude of Tucson. (See How to Observe on the About page for more on this topic.)

The Two Haunches of the Lion do not figure in the calendar of the rains stars. However, as the Howling Dogs, the same stars set during the warm spring rainy season (ad-dafa’i).