An asterism of the winter rainy season 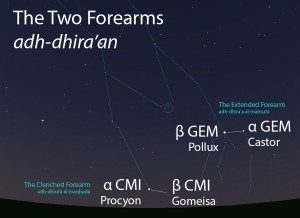 The Two Forearms (adh-dhira’an) as they appear setting in the west about 45 minutes before sunrise in early January. Sky simulations made with Stellarium.

Two bright pairs of stars that are roughly parallel to each other. The space between each pair of stars is nearly the same.

Ibn Qutayba (d. 879 CE) reported that the Extended Forearm was said to rise on the morning of July 5 and set on the morning of January 5. On account of the precession of the equinoxes, today we can expect to observe the Clenched Forearm setting in early January and rising in early August, and the Extended Forearm setting at the end of January and rising in late July, as seen from the latitude of Tucson. (See How to Observe on the About page for more on this topic.)

In the calendars of Qushayr and Qays, the morning settings of the Two Forearms occur during the cold winter season called ash-shita’.

Although the ecliptic (the path of the Moon against the stellar background) passes more or less right between the two pairs of stars that made up the Two Forearms, the Moon comes somewhat closer to the Extended Forearm, and so within the context of the lunar stations only it, and not the Clenched Forearm, had the honor of being a lunar station. In early listings of the lunar stations, the Extended Forearm is the ninth station of the year. This was later changed to the seventh lunar station after the stations were adjusted to begin with the vernal equinox.

The Two Forearms are part of the Lion (al-asad, الأسد) folkloric celestial complex, which extends from these Two Forearms to the Two Shanks (as-saqan, الساقان).