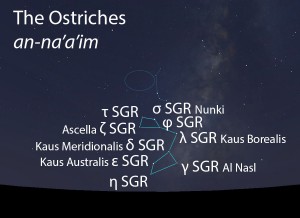 Two groups of four bright stars, each arranged as a quadrilateral, with a ninth star connecting the two groups.

The 8 or 9 stars of the Ostriches take about 12 days to rise and 20 days to set. Ibn Qutayba (d. 879 CE) reported that the Ostriches were said to rise on the morning of December 23 and set on the morning of June 23. On account of the precession of the equinoxes, today we can expect to observe the Ostriches setting from late June into mid-July and rising in mid to late January, as seen from the latitude of Tucson. (See How to Observe on the About page for more on this topic.)

The Ostriches do not figure in the calendar of the rains stars.

In early listings of the lunar stations, the Ostriches are the 22nd station of the year. This was later changed to the 20th lunar station after the stations were adjusted to begin with the vernal equinox. Two stars from each of the two groups of Ostriches match the Hindu nakshatras called Purva Ashadha and Uttara Ashadha.

The Ostriches are the primary stars of the Ostriches (an-na’a’im, النعائم) folkloric celestial complex.