An asterism of the rainy season of fruit harvest

The Alighting Vulture is the higher one of the Two Vultures (an-nasran). In modern-day Arabic, the term nasr more commonly indicates an eagle, but this was less common long ago. Back then, nasr designated a class of large birds known for plucking flesh with the curved ends of their otherwise flat beaks. The Egyptians revered the vulture for its utility in eliminating decaying animals, and the Arabs similarly regarded them favorably. The Alighting Vulture was so named because the two moderately-bright stars created a swept-back shape with the central brilliant star, like the wings of a vulture that is flying downward and preparing to land. 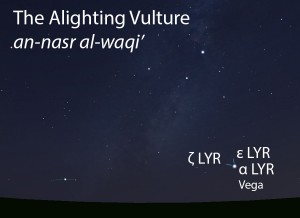 The Alighting Vulture (an-nasr al-waqi’) as it appears setting in the west about 45 minutes before sunrise in mid-August. Sky simulations made with Stellarium.

A brilliant star with two less bright stars located close to it in a triangular formation.

On account of the precession of the equinoxes, today we can expect to observe the Alighting Vulture setting in mid-August and rising in early December, as seen from the latitude of Tucson. (See How to Observe on the About page for more on this topic.)

The Alighting Vulture is not one of the lunar stations.

The Alighting Vulture is one of the two primary stars of the Two Vultures (an-nasran, النسران) folkloric celestial complex.