An asterism of the winter rainy season

Jawza’ as a rain asterism forms the center of the larger celestial complex also known as Jawza’, the only fully articulated human figure in the ancient Arabian sky. In the earliest times, the name referred to only the three bright stars that are lined up in the middle of the figure. The name “Jawza’ ” is a feminine derivative of the word that means “middle”. 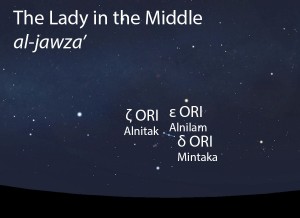 Jawza’ as it appears in the west about 45 minutes before sunrise in early December. Sky simulations made with Stellarium.

A trio of very bright blue-white stars that are lined up in a perfectly straight line. Each of the side stars is equidistant from the center one. This grouping is known in modern astronomy as the Belt of Orion.

The three stars of Jawza’ rise one after the other in a vertical line, taking four nights for all three to rise. This coincides with the rising of the lunar station called the Neck Mark (al-han’a). The stars of Jawza’ set in a diagonal orientation that takes 2-3 days to disappear completely and begins when the lunar station called the Follower (ad-dabaran) sets. Ibn Qutayba (d. 879 CE) reported that the Neck Mark was said to rise on the morning of June 23, and that the Follower was said to set on the morning of November 26. On account of the precession of the equinoxes, we can expect to observe the three stars of Jawza’ setting in early to mid-December and rising in mid-July, as seen from the latitude of Tucson. (See How to Observe on the About page for more on this topic.)

In the calendars of Qushayr and Qays, the morning setting of Jawza’ marks the start of the cold winter season called ash-shita’.

Jawza’ does not figure in the calendar of the lunar stations.

The rain star grouping called Jawza’ expanded over time to become a prominent folkloric celestial complex that retained the name of Jawza’ (al-jawza’, الجوزاء). Within that context, the original three stars of Jawza’ are seen as her Belt of Pearls.